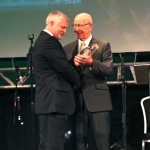 This March 17th, the “Pride Of Eireann International Awards” acknowledged Derek O’Neill for his remarkable humanitarian work with an award! The prestigious celebration was held on St Patrick’s Day in Manchester, England.

Joe Casserley the UK co-ordinator of the event said “The Pride of Eireann Awards were inaugurated in 2008 and take place every four years to mark outstanding achievements within the Irish community, along with highlighting the work carried out by some of the lesser well know organizations and individuals in England, Ireland and beyond. Previous winners have included Keith Duffy, Brendan O’Carroll(Mrs Brown), Eamonn Holmes and Gloria Hunniford to name but a few. Our winners come from many different areas such as the world of TV, Music, Sport, Media, the Irish community and charity organization’s. The one thing that they all have in common is that they inspire others and are all worthy Ambassadors for Irish Culture.”

The event featured a gala dinner, during which the awards were presented. It was a star studded evening with a whole host of celebrities in attendance who received awards and helped to present them. Among the attendees at the event were special guests such as the legendary Val Doonican and Manchester United’s Sir Bobby Charlton.